Selectivity in treating the cervix is important because without it the indiscriminate destruction of tissue will result, with a loss of diseased tissue and healthy tissue alike; and this is exactly what occurs with ablative procedures such as cryotherapy and excisional procedures such as LEEPs. Studies have demonstrated that LEEPs can result in damage to the cervix as well as an increase in pre-term labor for future mothers. Unlike these indiscriminate treatments for dysplasia, escharotic therapy employs biochemical finesse: the more abnormal the cell the greater the damage done by an escharotic; the more normal the cell the less the damage. In other words, escharotics will kill dysplastic cells without damaging healthy ones. However, fanciful this might seem, it’s actually true and it does this by uncoupling the electrochemical gradient of abnormal cells.

Every cell in the human body maintains an electrochemical gradient across its surface.This electrical charge is created and maintained by the pumping of sodium and potassium in a way that makes the cell negative on the inside with respect to the outside. This charge is necessary for the cell to do work and without it the cell is dead. Sanguinarine, the active chemical in bloodroot, shuts down sodium-potassium pumps. The reason why abnormal cells are more sensitive to this inhibition of pumps than healthy, uninfected cells is that as they become more and more abnormal—in other words, as the cells of the cervix become more cancer-like—they have to rely more and more on the activity of the pumps. This reliance on increased sodium-potassium pump activity is due to the fact that as cells become cancer-like they leak ions across the cell membrane which causes them to begin to lose their charge. Normal cells that don’t leak ions can tolerate some of their pumps being shut down whereas dysplastic cells cannot; hence, the selectivity of an escharotic solution.

You can think of employing an escharotic in the treatment of cervical dysplasia as a highly sensitive microscopic scalpel that only cuts out abnormal cells while leaving healthy cells. The non-selective, wholesale removal of part of the cervix with a knife or electrocautery knife (i.e. a LEEP) that is the mainstay of conventional gynecologic treatment is medieval by comparison. Selectivity translates into a greater likelihood of getting all of the abnormal cells while minimizing negative side-effects associated with surgery.

Figure 1 is the image of the cervix of a 27-year-old with severe cervical dysplasia (CIN3) and HPV16 after the application of my escharotic solution. The solution has the additional benefit of staining abnormal cells allowing for their visualization. Figure 2 is two days later as I began to remove the resultant eschar of dead tissue. Figure 3 show more removal and finally Figure 4 demonstrates the cervix after the full removal of the eschar. Figure 5 is the actual tissue that was removed. Because this patient was flying to Chicago for treatment, she will be treated again in one month and most likely one month after that. In the meantime her cervix will have time to heal and for healthy tissue to replace the diseased tissue that was removed. 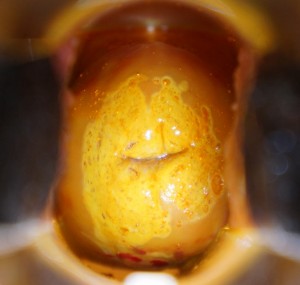 Figure1: CIN3 after application of escharotic.

Figure 2: The resultant eschar has been partially removed. 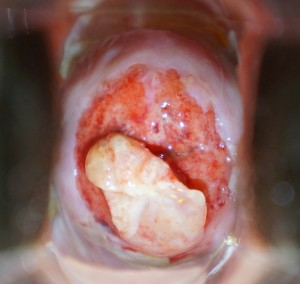 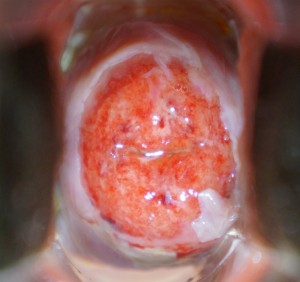 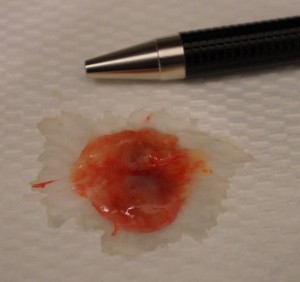 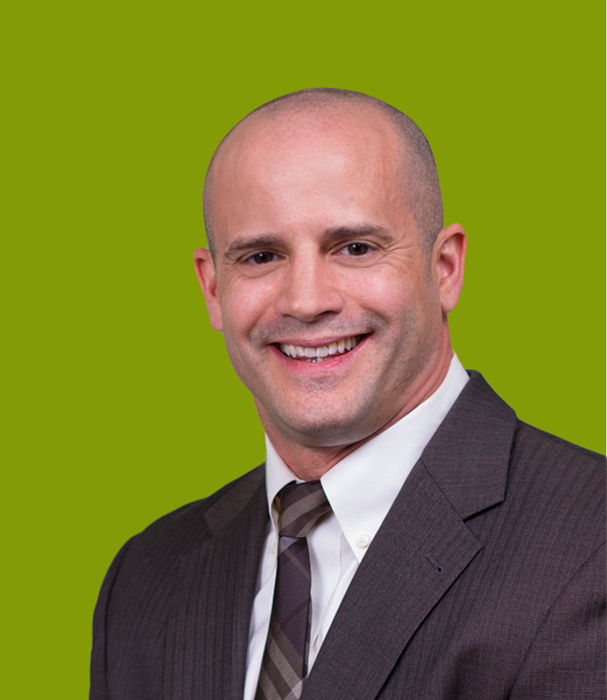